"One Rupee Notes: A legal tender for silver rupee coins to nickel rupee coins, in 1947 all silver content was gone from the rupee."

1917 First issue:
One rupee notes were first issued on 30th November 1917 representing 1917 one rupee silver coin. These notes were issued roughly in two types based on the following facts.

Type 1: The notes were issued in booklet of 25 notes with each note appearing as cheque leaf having perforations on the left. These notes were printed in England. Signed by A.C. Mc Watters. These booklets appeared like modern day cheque-books [see below]. 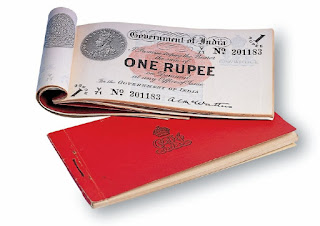 Prefixes issued in booklets were, Y and Z only. Sometimes inside cover, advertisements were printed. The obverse of the note has serial numbers diagonally left to right. ONE RUPEE in bold in the centre. On the left top we see obverse of rupee coin with portrait of King George V [see below]. 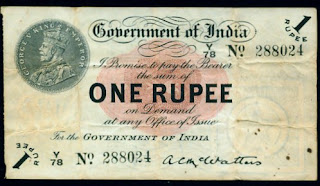 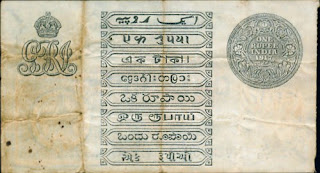 Type 2: The notes without perforations on the left. Signed by M.M.S. Gubbay, H. Denning. It came in packets wrapped in a brown paper ribbon [see next]. This issue was signed by M.M.S. Gubbay in some prefixes: A, B, C, D, K, L, M and R. On the reverse in the language panel incorrect Gujarati: 'Rupaya' in place of 'Rupayo'. 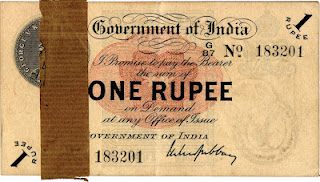 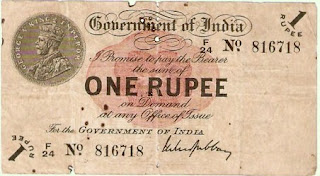 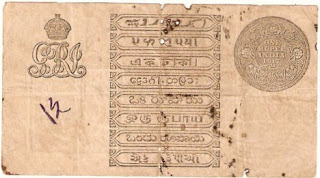 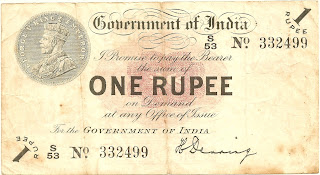 H. Deninng signed notes were issued in S prefix only. These notes were universalized issue. The prefixes earlier stand for circles of issue. For example, A = Cawnpore, B = Bombay, C = Calcutta, K = Karachi, L = Lahore, M = Madras, R = Rangoon. D onwards = Universalized issues. If we read the promissory text on the notes we observe: "I promise to pay the Bearer the sum of / ONE RUPEE / on demand / at any office of issue." These notes were convertible to one rupee silver coins. It is known from people who used these notes that, "...the acceptance of paper money was less in comparison of coins", confirmed by Rointon Andhyarujina when he commented about his father's time. However, British Administration encouraged people to use paper money for one rupee denomination as well. The main reason for the use of paper money convertible to silver rupees was an idea to curb silver deposits for World War I. These notes were withdrawn in 1926.

1935 Second Issue:
These notes were printed on hand made moulded paper. The notes depicts 1935 one rupee silver coin on the obverse and reverse. However, this issue was issued on 24th July 1940. This type was not issued with promissory text which made these notes token money for silver coin used around 1940. The are four types of this issue. All notes were signed by J.W. Kelly. The use term, 'Fiat Money' is also observed for these notes, similar to US dollar notes.

Type 1: Watermark GOVT OF INDIA, stars spread on the paper. These notes were issued in booklet with perforations and printed by Currency Note Press, Nasik [see next]. 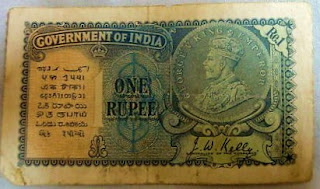 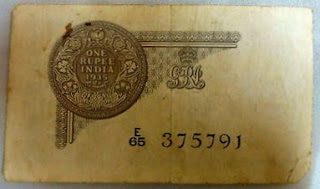 Perforations on the left, printed on hand moulded paper. Serial number font is distinct from other types in this case, E/65 (above). These notes were issued in brown booklets shown below. 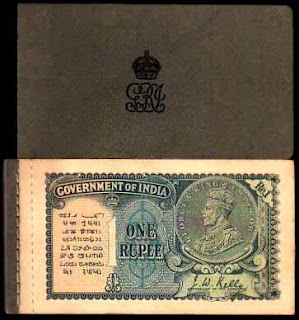 One rupee notes in booklet were stitched by thread.

Type 2: These notes were printed by Bank of England press without perforation with watermark seen from reverse GOVT / OF INDIA with King George V head profile facing left. Serial number has different pattern [see next]. 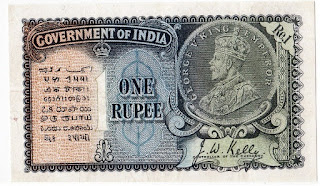 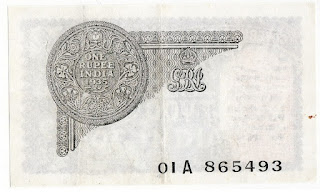 Serial number pattern, for example above: 01 A 865493, and without perforation. All other specifications are similar to type 1. Two prefixes were issued namely, A, B.

Type 3: Serial number font is distinct from type 1, type 2 [see next]. Printed in England by Waterlow and Sons. Prefixes known ranges from 01C to 80C with watermark variety as in type 2. 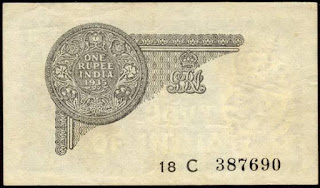 Serial number pattern and font is different from Type 1, type 2. Obverse is similar to other types.

Type 4: Serial number pattern is different from type 1, type 2, type 3. The prefix known is XX/D. An example is shown below: 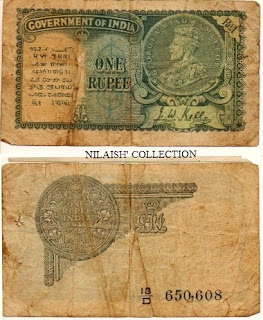 This design was made in 1935 by Tom I. Archer. The new design notes were issued with portrait of King George VI in 1944. It may be noted that the coins at that time were containing rupee coins with half silver content in the metal. Hence, the rupee reduced its value by half by the end of the issue.

1944 Third Issue:
The design depicts 1940 silver rupee coin on the obverse and reverse with the portrait of King George VI. However, these notes were issued in 1944 and withdrawn on 27th October 1957. These notes were signed by C.E. Jones, Secretary (Finance Department), Govt of India. There are four types of this issue.

Type 1: Serial number in black and issued in prefixes A-Z, no inset alphabet [see below]. 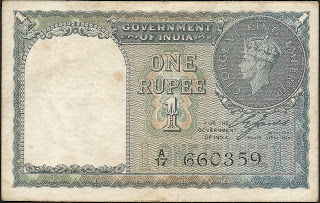 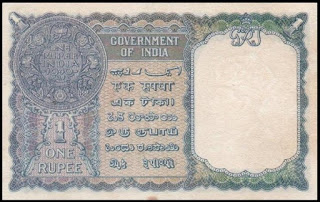 Type 2: Serial number in green with inset alphabet A in bold. Prefixes issued of this series were A-W [see next]. 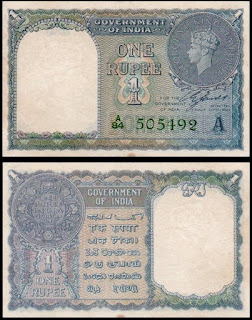 Type 3: Serial number in black with inset alphabet A in bold. Prefix issued of this series was in W/XX (This type is the most scarce type of all series). 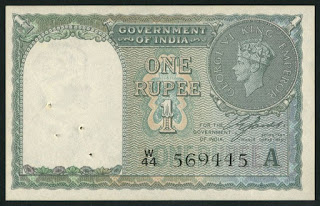 Type 4: Serial number in red with inset alphabet. These notes were issued on the eve of independence, 15th August 1947 [see next] and withdrawn in October 1957. This type is also scarce type and seldom seen in the collector's market. 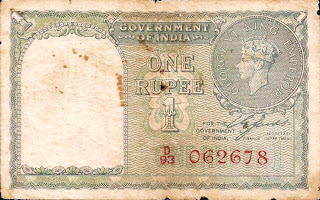 By 1946 the silver content of rupee coins was lost due to devaluation of old silver rupee. These new rupee coins were made of nickel. As a matter of fact, the rupee was no longer having precious metal silver in it. Hence, we observe the legal tender term appeared on Burma overprint notes issued for British Military Administration and Burma Currency Board for use in Burma. As India awakes to freedom at midnight, all the silver content of our rupee coins were drained to United Kingdom or Great Britain with the end of their diplomatic colonial rule.

Notes & References:
1. Razack, R.; Jhunjhunwalla, K.; (2012) "The revised standard reference guide to Indian paper money", Currencies & Coins, Mumbai.
2. Shaikh, B.; Srinivasan, S.; (2009) "The Paper & The Promise", RBI Press.
3. The image which is not from my collection is highlighted with owner's name.
4. This article may have error but it is written for collectors and numismatists of the world to refine the content further to the scope of this work.
5. Rointon Andhyarujina, is a collector of paper money of Colonial period and is a life member of International Banknote Society.